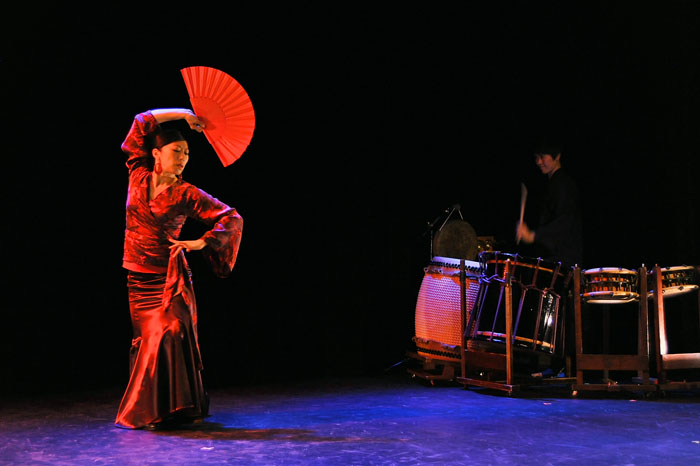 QUEMADO is a collaborative piece between shamisen, taiko set, and Flamenco dancing. The music is composed by Aki and choregraphy by Flamenco dancer Kiyo Asaoka. The word “quemado” means “burnt” in Spanish, and the title is used to describe the spirit of Flamenco dance, as well as the intensity of performing this piece, both in the music and the dancing. This piece was the result of a collaboration between Kiyo and Ten Ten in their most recent CD release concert.

Flamenco is a highly-expressive, Spanish art form. It is amazing to see flamenco dancers express their emotions by with clapping, footwork, and intricate powerful body movements.

When Kiyo Asaoka came to me and asked me to write a flamenco composition for her, I was thrilled, but also scared. I wouldn’t want to end up playing an artificial flashy shamisen solo, imitating my favourite flamenco guitarist, Paco De Lucia.

After Kiyo and I practiced together at the studio, we both began to feel it come together. Our temperatures rose in conjunction with our rising emotions. My percussive shamisen reverberated in the air, intertwining with her loud hand clapping and fierce stomping. After a long session, we both experienced the same physical pain, just like having been burnt (Quemado in Spanish). It was not a superficial dermal skin burn but a low temperature burn, the kind which sneaks up on you over an extended period and which can cause havoc to your body because you don’t even know that you’ve been burning.
– Aki Takahashi (ten ten)

TEN TEN is a Toronto-based music ensemble directed by Aki Takahashi. Taking inspiration from Japanese folk music, the ensemble seeks to create a unique voice using a variety of Japanese instruments, breathing new life into this traditonal art form, and also situating them in new musical and multidisciplinary contexts. 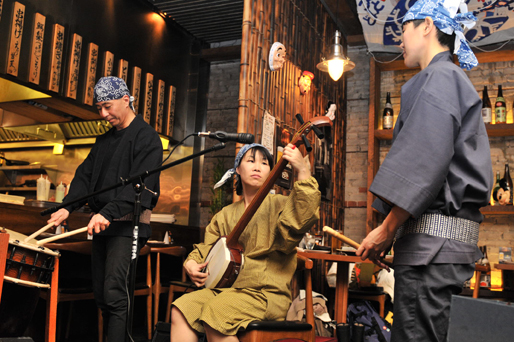 KIYO ASAOKA took her first steps into the Flamenco dance world in 1999 and, in 2002, became a company dancer for Arte Flamenco Spanish Dance Company in Toronto.
She has a strong commitment and passion for Flamenco, and continually strives to perfect her skills and talent; and over the years, has had the opportunity to take lessons with a number of masters of flamenco from Spain, to study and feel puro-flamenco.
She has also danced at Spanish restaurants and given private lessons.
For the last few years, in addition to her regular company performances, she dances at various Spanish cultural venues and social/corporate events, and works on her own creations with various musicians.